In the last couple of weeks I have implemented the beginnings of a major new feature, and continued work on the mini-boss from before!

I'm really pleased to say that I've managed to implement something that's been in the back of my mind for a little while. I've built a simple addition to my maze data structure to add random scenery to each room! Scenery elements get generated on the fly as you first visit each room, and their type and position get saved too. These then appear with a simple fade-in; this to improve a pop-up effect I noticed on objects that were taller than each room boundary (and would be visible from the room above). They also have a quick fade out for when you leave the room too, before they are destroyed. Check it out below!

Starting from this base, I've started to add a lot more character to each room type! Here are a few examples: 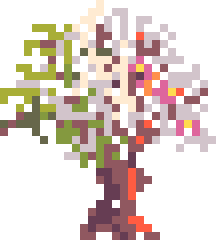 Some of the 'Forest' themed props

I've created a few new props for two areas - both the 'forest' scene which currently is the starting area and, uh, a load of lollies for some reason. These are an important part of giving each playthrough it's own character, as each maze in every playthrough will place these in different combinations and positions.

Here they are in action!

I'd like to animate some of these obstacles, for example it would be really satisfying to see the lollies melt with an offset on each of their animations, and I'm also considering scaling and flipping them to add some more variance.

The second task I worked on was completing the mini-boss mob spawn routine from the last update for the barbecue! The generated enemies now appear with a nice spinning animation, land on the ground and then chase you!

As you can see, I also added some more types of food to the barbecue mob generator routine: burgers, corn-on-the-cob, and sausages!

Next up will be deciding on how I would like the barbecue to move around - or even if it does at all.. I would love to hear suggestions!