I spent a little time recently crafting a new mini-boss.

So I obviously started by drawing up a barbecue! 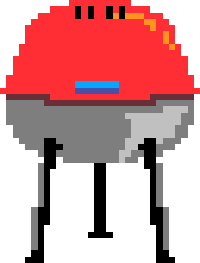 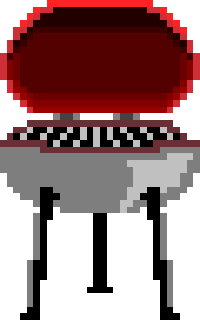 I first draw the bbq in its' two key states, closed and open. I prefer drawing everything by hand, sometimes overusing straight-line tools or elipse tools makes everything look overly geometric to me. Then I draw every frame in-between these two key frames, in this case by cutting off the top half of the closed barbeque, and scaling it to get a rough shape, and drawing over it by hand.

Eventually, I end up with this!

It looks slightly imperfect, but it will be moving around, chucking stuff about, and there will be a smoke particle effect, so hopefully any weirdness won't be noticed by the player.

Next step: spawning more enemies! The barbecue is a mini-boss, and as such it needs to be dangerous. What better way to be dangerous than spewing out piles of delicious cooked food!

To top things off, let's add a tasty particle effect – a tiny sprite, randomly scaled and placed across the grill, spawned repeatedly for the first half of the opening animation. The sprite gets larger and fainter as it moves up the screen, until it is fully transparent, then it is destroyed.

I'm quite pleased with it for the amount of time I put in, approximately 3-4 hours work. The next step is giving the barbeque a movement routine, a second movement for the mobs it generates - these will land on the floor, and then chase you like other mobs. Finally I'll hook everything up into the wave-generator. That should take hopefully around 1 more hour.

I'll also add in a few more mob varieties that can be spawned by this boss! I've already drawn up loads of sausages, some corn on the cobs, and burgers!